The history of humanity is replete with various concepts, ideologies, and dictating perspectives which glaringly, and a few times overtly, attempt to trivialize and relegate the influence of women in society. According to the United Nations, as stated by Rose Uchem and Emmanuel Ngwa, women constitute more than half the world’s population and do three-fourths of the world’s work. Yet women earn just one-tenth of the world’s income; own one per cent of the world’s property; three-fourths of women are starving; and above all, they represent over two-thirds of non-literate adults. Despite recent advances in women’s rights advocacy, which see women occupy influential positions in global affairs, women remain subordinate to men. This text paints out various ways in which women have been listed in the African setting and argues for the inclusivity of women going forward. In recent times, with the evidence of women, particularly African women, championing big agendas and welding global influence and applause, one would have thought that public perception of women as mediocre, weaklings, less intelligent, subsidiary, and the likes would witness a sharp decline followed by a more receptive perception of women as core contributors to development in contemporary African society, but such thinking is far-fetched or nowhere close to realization. In an elementary sense, subordination is the reference to someone as being lower in status or rank than another, or considering someone as being of less value or importance to another. 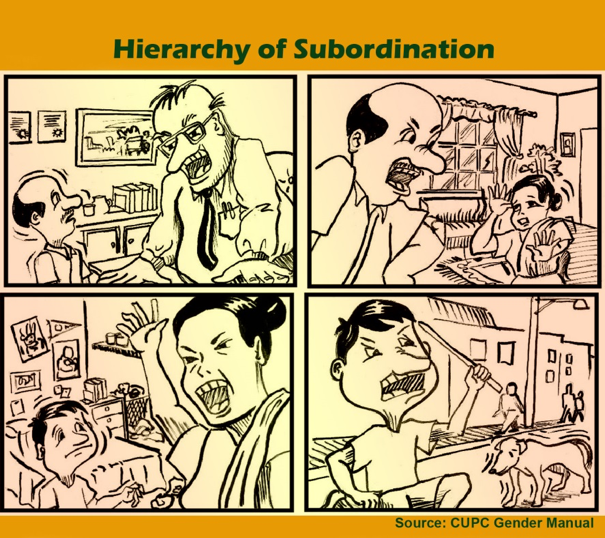 Marginalization can be thought of in terms of the conception of someone as insignificant or complementary. Subordination and marginalization of women are the results of the conception of women as secondary, of less value, and the subsequent discrimination or total omission of women in the political, economic, and socio-cultural spheres or affairs of society. These concepts work in tandem to exclude African women from public leadership at home, church, mosque, and, most importantly, decision-making and officiating societal functions. The subordination of women to men in African society can be seen in various instances, such as relegating women to seconders in leadership positions. Women are rarely called to lead prominent positions or chair societal affairs, regardless of their talents or qualifications. In any case, they are considered for any position. The closest ideal is having them for the assistance that they can offer for the success of such positions or functions. Referring to Chimamanda Adichie’s TEDxEuston talk, “We Should All Be Feminists,” she recounted how she lost a class monitor position way back in primary school to a boy who had no interest in the said position. Her teacher had stated that the class monitor position would be handed to the one who had the highest score on a scheduled class test. Chimamanda had the highest score but was refused the position by her class teacher on the premise that the class monitor had to be a boy. This is a result of society’s socialization to think that men naturally have to occupy certain positions or chair particular functions in society.

Citing Rose Uchem and Emmanuel Ngwa again, the marginalization of women in the contemporary African community manifests in economic, political, and socio-cultural forms. It is undeniable that recent campaigns, laws, and conventions have been implemented to economically empower women. However, access to multiple or unlimited opportunities that expose women to more rapid economic independence is farfetched. Women in most parts of Africa continue to endure economic suppression in forms like the denial of women’s right to gainful employment by some husbands, offering women low-income jobs, and the like. Democracy’s core value is the involvement of all citizens in the administration of public affairs. The political scene is still overwhelmingly dominated by men in most African nations, and in some, it is even a male-only space. Women are frequently prohibited from expressing their opinions in political gatherings, holding leadership positions, participating in decision-making regarding significant community issues, and are frequently asked to leave gatherings when a significant problem is to be discussed, with the belief that women do not keep secrets. Socio-culturally, women are lashed with inhumane widowhood rites, occupy low-earning jobs, and are denied the right to own land and property, in addition to the denial of the right to inherit.

It can be established that women’s marginalization in contemporary Africa is a result of the slow-changing patriarchal psycho-social, religious, and social institutions under which women are subjugated. The economic, socio-cultural, and political relegation of women is an impediment to efforts by relevant bodies and institutions to eliminate the situation. Economic development; increasing legal support for women; educational development; eliminating gender discrimination and stereotyping; increased access and control over resources; equal rights to own property; increased political participation; erasing socio-cultural barriers; and minimising gender pay gap are some of the ways we can contribute to an all-inclusive and accommodating environment that offers a platform for the advancement of women. Women are nation builders, and equal inclusion of women in current issues will only contribute to a significant economic, political, and socioeconomic transformation in contemporary Africa.

Ghana's Most Beautiful 2022 Grand Finale - All You Need to Know